Amazing chestnut harvesting and processing technology at the factory

After the chestnuts fall from the tree, watch for the spiny burs to split. Don’t harvest chestnuts if the burs are still green and closed because the nuts inside will be unripe. Harvest the nuts every couple of days. Don’t wait too long, as the nuts will ripen and quickly lose quality and flavor. Also, if the nuts lie on the ground for more than two days, many may be absconded by squirrels or other hungry wildlife.
When the burs have split, roll the nuts gently but firmly under your shoes, using just enough pressure to release the chestnuts. Avoid jumping or stomping, which will crush the nuts. Identifying Chestnut Trees
Chestnuts are the fruit of the Castanea species of trees, which are found throughout the world. The American chestnut has suffered from blight, and many of the native trees have been wiped out. So, chestnuts aren’t as easy to find as they once were. But if you’re willing to look around a bit, you should still be able to track down a chestnut tree.
This deciduous tree is very easy to identify. Fully grown chestnuts usually reach a height of 50 to 75 feet tall and grow long, skinny leaves that are shaped like canoes. The leaves have pointed ‘teeth’ running along the edge, and are attached to the tree by a very short stem.
But perhaps, the most telling characteristic of the chestnut is the spiny husks, called burrs (or burs), that grow in clusters on the tree. These protective burrs are where the chestnuts form. They typically appear on the tree in early summer and stay attached to the tree until late fall, when the nuts are ready to harvest. 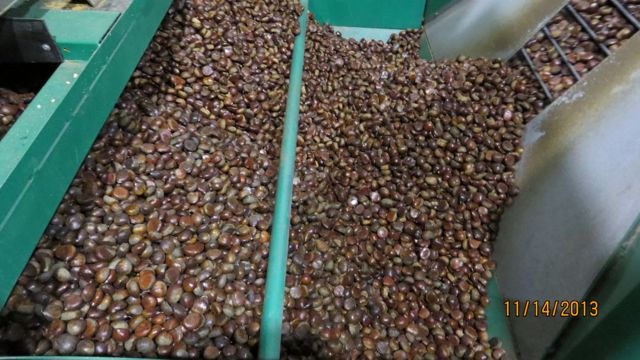 Do not confuse the horse chestnut for an edible chestnut tree. Horse chestnuts are poisonous. Horse chestnut trees have large leaves, consisting of five or more individual leaflets that share a single stem; and their husks are mostly smooth, with a small number of bumpy spines. You could easily pick a husk up without gloves. That’s not the case with sweet chestnuts. Look at a picture of each, and you’ll never confuse one for the other. They’re very easy to tell apart, once you’ve seen a side-by-side comparison.
Harvesting
Chestnuts are typically harvested mid-September through November and are one of the easiest nut varieties to harvest and prepare for storage. Here’s what you do:
Wait for the chestnuts to fall to the ground.
Gather up all of the nuts with open burrs. (You’ll definitely want gloves for this job.)
Remove the nuts from the burrs. Discard any with wormholes or other signs of damage.
Promptly store the chestnuts in air-tight containers and refrigerate or freeze. 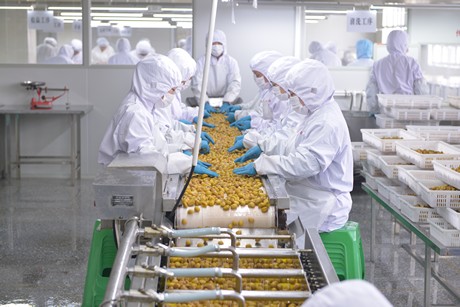 A well-known candied chestnut (Kestane Şekeri) company, in the northwestern province of Bursa, is producing 120 types of products made of chestnut.
The product range the Kafkas Company introduced to the market includes candied chestnuts, light chestnut puree, karyoka and karyoda, chestnuts covered with chocolate and chestnut dough.
Kafkas was founded 83 years ago in Bursa by Ali Şakir Tatveren. The company, which is run by the third generation of the family today, has gained attention due to the different products it has introduced to the market. Kafkas Pastry and Candy Merchandise Anonymous Company General Manager Ali Tatveren announced that the number of products they produced from chestnuts had increased from 100 to 120.
The products made at the factory in which 400 people work include; candied chestnuts, glazed candied chestnuts, broken glazed candied chestnuts, chestnut spread, chestnut paste, chestnut puree, peeled and sweetened chestnuts, chestnut puree without sugar and bitter cocolin covered bar with chestnut candies. A wide range of products are also exported to cities abroad. “We are producing 120 different kinds of goods from chestnuts by using caramel sauce, marzipan, hazelnut paste or pistachio paste.
These are produced either with machines or by hand. We are also using the broken chestnuts and even dough is made from these,” stated Tatveren.
Light Candied Chestnuts
There are also diet products for consumers concerned about gaining weight from chestnuts. Tatveren said that this month they had introduced new products to the market. Besides the classical karyokas, they have different ones which are called the “new generation” karyokas. There are also new chestnut sweets made by using dates and plums. These new products increased the total number to 120. 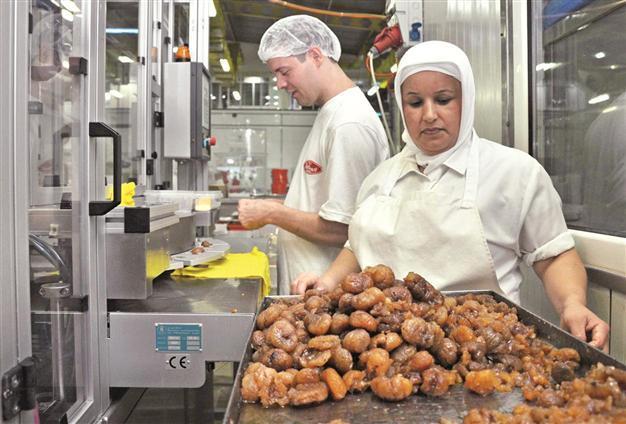